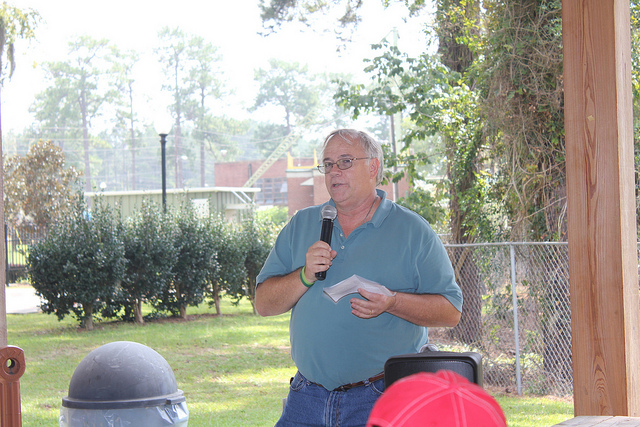 The next stop on the Georgia Peanut Tour focused on energy! Tour attendees visited Georgia Power’s Plant Mitchell which is located on 243 acres in Dougherty and Mitchell counties. Plant Mitchell is a 288, 200-kilowatt coal-fired and combustion turbine facility. Although small in comparison to some generating stations in the nation, Plant Mitchell provides enough electricity in six months to power a town the size of nearby Albany. At lunch on Thursday afternoon of the tour, attendees were able to learn more about this plant and its function and benefits to the community from John Crowell.

There are three units (generators) at the plant with different megawatt producing capabilities. Plant Mitchell also has three combustion turbines that use jet engines to turn the generators. These jet engines are the same engines used on many airplanes today. These generators are rated at 32 megawatts each.  Plant Mitchell operates on the same principles as other fossil-fueled electric generating plants. Coal that has been ground into a fine powder by a pulveriser is blown into a furnace-like device, called a boiler, and burned. The heat produced coverts water, which runs through a series of pipes in the boiler, to steam. The high-pressure steam turns the blades of a turbine, which is connected by a shaft to a generator. The generator spins and produces electricity.

Environmental compliance, economic effects, safety and health, and employee and community support are all observed by Plant Mitchell. The plant follows the strict environmental standards incorporated by Georgia Power, monitors all environmental trends, and makes continuous improvements to Plant Mitchell. The plant has had a significant effect on the economic vitality of Dougherty and Mitchell counties. Operated and maintained by Georgia Power, Plant Mitchell is a vital part of Georgia’s energy and economic growth. The work accomplished at the plant truly matches the company’s mission statement which is “Plant Mitchell will produce electricity in a safe, reliable and efficient manner through continuous employee involvement, therefore, maintaining respect as “A Citizen Wherever We Serve.”